Melba Liston and Her 'Bones

Many great trombonists have come from Kansas City, but only one was a pioneer in post-bop jazz while defying gender stereotypes. Melba Liston was that one.

Liston grew up in Los Angeles after her family moved there in 1937, studying trombone and music theory from age eleven. After high school she landed a gig with Gerald Wilson's group and then went on to join Dizzy Gillespie's bebopping big band in 1949. At a time when young female musicians were expected to be singers or, at best, pianists, Liston proved herself as a fine soloist on an instrument that, until then, was a man's horn.

Promoters tried to set Melba up with all-girl groups, but she resisted. Although she had written arrangements for Dizzy and had even worked in Count Basie's orchestra for a period, she became discouraged with music and took a job as a clerk for the L.A. Board of Education. It was only in 1956 when Gillespie, on a suggestion from his young arranger Quincy Jones, asked Liston to join his new big band that Melba returned to performing full time.

Liston moved to New York in 1957 and formed a long-time partnership with pianist Randy Weston, writing superb arrangements for many of his classic compositions – "Babe's Blues," "Little Niles" and "Hi-Fly" chief among them. Weston's masterwork, "Uhuru Africa," created in 1960 and released on Roulette, was a joint project with Liston and was one of the first jazz suites to explore the music of that continent. The Liston/Weston musical partnership lasted right up until Melba's death in 1999.

I can't remember where I came across this treasure, but I know I must have been elated to be able to hear Melba Liston featured as soloist and arranger on a project of her own. This MetroJazz album was her only release as a leader, and it was done about a year after she'd left L.A. for New York City. MetroJazz was a short-lived label distributed by MGM that had been organized by critic and song-plugger Leonard Feather. Because it was number thirteen in the label's total output of fifteen records, "Melba Liston and Her 'Bones" was only briefly available before it vanished forever from record bins.

Only to appear as a download here on "Gems of Jazz" some 53 years later, that is. 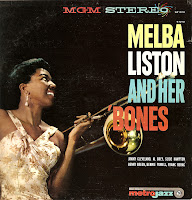 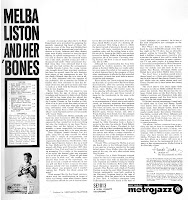