Six or seven years ago, I got a call at the radio station where I work. The caller wanted to know if I'd be interested in a bunch of old records that a relative had left her. She said they were jazz records. "What kind of jazz records?" I asked. "The kind that break," she said. "The real old kind. I don't think you can play them anymore." I said I'd come take a look.

This sort of thing happens with some regularity. People know me as the jazz record guy at the station, and when they want to clean out those old records in the basement or attic, they call me. Occasionally I pick up some interesting sides, but usually it's a 35 pounds of mildewy Lester Lanin, Al Hirt, Martin Denny and Ping-Pong Percussion albums. Not that there's anything wrong with those, but I'm a jazz guy. So I usually make nice, offer many thanks and quietly donate their stuff to the local library book sale.

But not this time.

In this lady's basement were three big, dusty cardboard boxes. In the boxes were probably 300 78 rpm discs. That's usually a bad sign – think Vic Damone, Patti Page, Kay Kyser, Mario Lanza. But the first shellac platter I pulled out was a Sonny Stitt on Roost. The next one was by Gil Melle, a 12-inch Blue Note, and the one after that was by Cyril Haines on red-label Comet. Who the hell was Cyril Haines? My palms were starting to sweat.

It turned out that this lady's relative had been a disc jockey and entertainer in the '40s from somewhere out west. She wouldn't tell me much about him, but she said he was a jazz guy. I got the sense she didn't like him much and that's why she was getting rid of his stuff. A purge. And I was the beneficiary.

When I got the boxes home – carefully! – I spent half a day going through them, marveling at what they contained. Here was a stack of Charlie Barnets on obscure labels like Derby and Abbey. An ultra-rare Floyd Smith, one of the first electric guitarists out of Kansas City. A Coleman Hawkins with Hawaiian guitar accompaniment. Johnny Hodges on Norgran. Even a Duke Ellington/Bing Crosby match-up! Crazy! 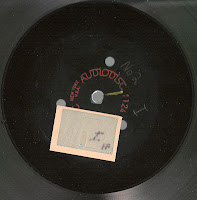 But there was one set of discs that intrigued me. I saved them for last. They were five big, 12-inch acetate records, the kind that were used back in the '40s for making one-off recordings. These discs were cut on both sides and had no information on them other than a number label – 1 through 5. They had been carefully kept in brown-paper envelopes that had been handmade by the previous owner. The platters were unnaturally cool to the touch.

I put one on the turntable and dropped the needle. What came out of the speakers was the echo of a place and time gone sixty years. It was a radio broadcast – an aircheck.

It turns out that these five discs captured in real time a 40-minute remote from a nightclub in downtown Chattanooga. The host/emcee was a fellow named Eddie Taliaferro – the very same gent the lady mentioned as I loaded her boxes into my car. They had been his records and now that was his voice. Shivers!
But why had he carefully preserved this broadcast? Perhaps because it had been an early brush with fame. The featured performer for evening's floor show was blues singer Viola Wells – known professionally as "Miss Rhapsody." The date for the broadcast was probably spring or summer 1945, and Miss Rhapsody was a rising Savoy recording star. Her big number was "Hey, Lawdy Mama," and she was on a tour of the Southwest. Big-time New York talent had come to little old Chattanooga. Eddie dug her and wanted to save the moment.

So what you hear in this offering is a previously unknown live performance by Miss Rhapsody, doing all her hits. While she is obscure today, in her time she was a huge attraction at Harlem's Apollo Theater and one of the great female interpreters of jump blues working the TOBA circuit.

But there's more. What you will also hear is what it was like to play a one-nighter in a tank town with a pick-up band and an all-night drive to the next gig waiting once the show was over. The Brown Derby, the club hosting the broadcast, was a joint in a funky part of Chattanooga habituated by gamblers, prostitutes and hustlers. The house band – the "Brown Derby Orchestra," Eddie calls them – flubs its way through the book, dishing up clams, dropped notes and bleats while suffering severe intonation problems. But Rhapsody rises to the occasion, carrying the boys along, unfazed. She's seen it all before – a real pro. You can't help but admire her.

Also on the recording is a number by a member of the floor show – a "Miss Dodo." Not bad, and she could dance. And then there are the ads – including one for ladies' "lawn-jer-ee." Priceless artifacts of a bygone era.

So here is the complete 10-sided transcription, heard for the first time since it was originally broadcast some 65 years ago. The sound is scratchy in places, but I think you'll be able to overlook the imperfections ...﻿﻿﻿﻿﻿
Miss Rhapsody at the Brown Derby Radio aircheck