A friend of mine used to trash West Coast drummers. He thought the "cool" sound from California was pure white bread, regardless of the ethnicity of its players, and it was his firm belief that West Coast rhythm sections were the pantywaists of jazz. He was a former student of Lee Konitz, so I would get out of the way and let him talk.

But it's true that those mid-'50s rhythm players from San Francisco and Los Angeles had a lighter sound. Chico Hamilton especially. Of course, when you compare a drummer to Max Roach, Art Blakey, Roy Haynes and the rest of the boys back east, he can't help but sound wimpy.

So here's a sampler that offers a snapshot of West Coast playing in 1957, the year the east-west debate was at its most passionate – and silliest. It's the third in a series of LPs issued by Pacific Jazz on the very limited Jazz West Coast imprint. I'm including only Vol. III even though I have Vol. II because III is all previously unissued material (I unfortunately don't have Vol. I). I believe most of these tunes remain unissued to this day.

There is some excellent playing on this vintage disc – Gerry Mulligan's sinewy sextet for starters, and Art Pepper's pre-downward spiral altoing. Check out Jim Hall's "Things Ain't What They Used to Be" with Carl Perkins, too. I think Jim's playing a Les Paul on it, if you can believe that.

My West Coast-disdaining pal would have ripped Bud Shank's "Polka Dots and Moonbeams" – the one real lightweight on the record. And "Sweet Georgia Brown" comes close with Bob Cooper's annoying oboe. Those ex-Kenton boys picked up some bad habits working with Stanley.

The cover of this album is more classic kitsch. Frothy surf surging under a bright blue sky, an emerging diver in a wet suit with speargun and – a trumpet? Jamming with the fishes perhaps. Richard Bock, Pacific Jazz's bossman, was responsible for the concept. It's another Claxton pic, by the way.

As always, the music is ripped from the original vinyl with only a gentle cleaning of pops and clicks. 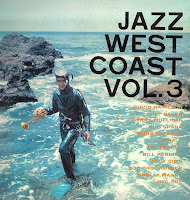 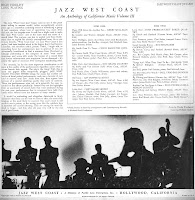