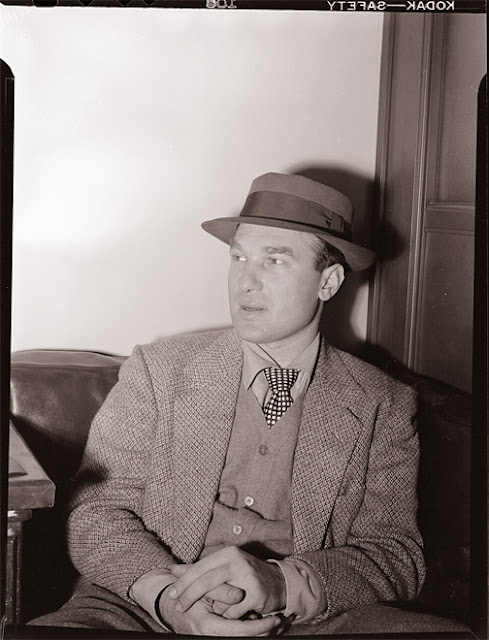 In his characteristic short-crown fedora and sweater vest, Norman Granz is caught in rare repose by photographer and jazz writer Bill Gottlieb and his Speed Graphic. By the early '50s, when this photo was taken, Granz was the captain of jazz industry. Photo by William Gottlieb


I have two little EPs from the early days of the 45- and 33-rpm format and I was trying to come up with a way to post them here on Gems without forcing you, our esteemed visitor, to have to devote an entire CD to a paltry 15 minutes of music. Then an idea came to me – why not pair them under the unifying element of their producer, impresario Norman Granz? Works for me. Now you can download a more-efficient paltry 25 minutes of music.

But ... who was Norman Granz? Where to begin?

The originator of the "Jazz at the Philharmonic" concert concept, Granz was a Los Angeles native who pioneered integrated jazz shows in the forties, owned numerous successful record companies, managed top jazz talents, marketed national and international tours, and made the careers of jazz stars like Ella Fitzgerald and Oscar Peterson. A shrewd businessman in an industry rife with well-intentioned amateurs, Granz was to some a savior and prophet, to others a manipulative Machiavelli.

In the fifties, Norman would regularly buy spreads in multiple jazz publications touting his next JATP tour, or his star players' jazz poll victories, or his latest concept album ("The Jazz Scene" being the first in a series of high-priced "collector's items"). His name appended to a jazz concert usually guaranteed a capacity audience of hooting, whistling and "Go, man!"-screaming jazz maniacs. And he would frequently record the results and issue them in a never-ending series of albums (78 and 33 rpm) under the JATP rubric. With Norman, everybody made money.

The great Chicago jazz DJ, Dick Buckley, worked for a while for Granz in the mid-'50s. While he never really criticized his former boss on air, I heard Buckley more than once mention that Norman got rich while his stars wound up scuffling for nickels and dimes. I myself saw Norman as a commercializer, a guy more interested in making a buck than in making art. When Norman moved permanently to Switzerland in the early '60s, I remember thinking he probably wanted to be closer to his money.

All of which is beside the point. The guy did much to support the music and its artists, and these two EPs are evidence of the wonderful stuff that could be produced under his direction. I don't believe this music is currently available in digital form, though it was issued on several LPs back in the day.

Three of the four Basie tunes have the Count fronting a sextet featuring Joe Newman and Paul Quinichette. Quinichette is often dismissed as a Lester Young-wannabe, but to my ears he exhibits real individuality here. Lester never sounded like this. "Tippin'" is a big band performance with a nice solo from "Lockjaw" Davis, probably an Ernie Wilkins chart. This is Basie before the arrangers were brought in to make over the band, and they swing hard. That's the Redbank Kid with bassist Gene Ramey in the photo, by the way. 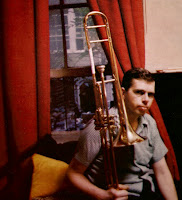 Bob Brookmeyer was a rising talent when this EP was issued. He'd been working with Stan Getz (another Granz property) at the time of this recording and had been in a number of top-level big bands including those of Woody Herman and Claude Thornhill. He's heard here with a West Coast rhythm section, playing perhaps a little too laid back by East Coast standards (these things mattered in the mid-'50s). Brookmeyer was unusual in that – unlike most trombonists of the day – he played a valve version of the horn. David Stone Martin thought otherwise – he shows Bob with a standard slide trombone on the cover. You can see Brookmeyer with the correct instrument in the picture.

As always, the files here were ripped directly from the originals with only a slight cleaning up of pops and clicks. Your choice as to whether the music gets filed under Basie or Brookmeyer. Or Granz, for that matter. 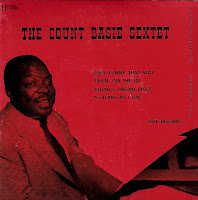 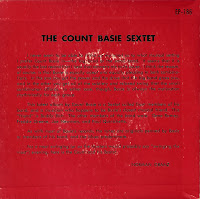 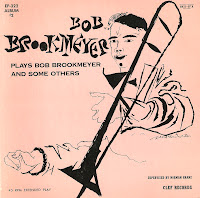 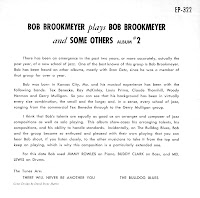