Can music sans improvisation be considered jazz? This album may be a case in point.

Jimmy Giuffre, the guy with the unpronounceable surname, was an exponent of – what? – third stream music in the 1950s. Originally an arranger for Woody Herman, Giuffre secured a place in jazz history by composing (and playing on) "Four Brothers," and then made his mark as a soloist of substance with Shorty Rogers' Giants. But it was with a series of trios and quartets that the reedist really found his musical voice. Not exactly cool, not really chamber jazz, maybe a blend of classical and jazz approaches, the music produced by his groups remains unlike anything before or since. Only the MJQ and perhaps Art Farmer's quartet with Jim Hall capture a similar quiet, introspective intensity. Giuffre's music, though, had limited appeal, and many of his recordings have eluded collectors for decades.

I came across this record at an online auction site and knew I had to have it. I normally pay a buck or less for such treasures, but I ponied up considerably more for this Capitol disc. I don't know why – I'm not a huge fan of Jimmy Giuffre or the school of music he represents (if he can be said to represent any school at all). But Giuffre records are like hen's teeth, and a clean one is a true rarity, so I PayPal-ed my way to ownership. Because Jimmy's music is often very quiet with lots of silent spaces, vintage discs of his can often have distressingly bad sound quality. But this mono LP is cleaner than clean.

So here is "Tangents in Jazz," an odd work even for the Giuffre oeuvre. The liner notes describe its distinguishing characteristic as music with "no audible beat." Jimmy himself says it's "jazz, with a non-pulsating beat." To my ears, the beat's there all right – it's the improvisation that's lacking. As far as I can tell, only the trumpeter, jazz man and comedian Jack Sheldon, gets any real solo space. The rest is written out.

What is perhaps most remarkable about the music here is that it was produced at a time when groups like the Jazz Messengers were forming and hard bop was emerging as the dominant jazz style, at least on the East Coast. Giuffre was clearly in a different place. His compositions, despite their formal quality, are tuneful and compelling, and the record works well as a coherent whole. See what you think of it.

As always, these files were ripped right from the vinyl with only a very minor cleaning of the sound. 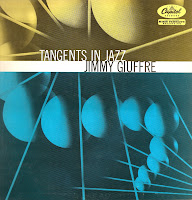 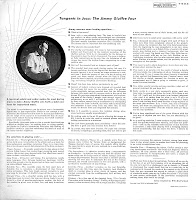 All compositions except 6 by Jimmy Giuffre

The first time I heard Charlie Christian was when I bought an Everest budget LP at the Harvard Coop in Cambridge. It contained disc recordings made by Columbia student Jerry Newman at Minton's Playhouse on 118th St. in Harlem back in 1941. But I didn't know that then, and nothing about the recording's genesis appeared on its cover. I just was amazed by the playing.

Back in those days (the hoary '70s), there was very little by Charlie Christian available. The Everest and several other companion volumes on that label were pretty much it. But bootlegs – fan-made LPs made from tapes and radio airchecks – were around if you looked. Many of them came from the endless reels of radio broadcasts recorded by recluse and legend Boris Rose, but many others were of unknown origin. If you went to specialty record stores in any of the big jazz cities, you could find them. In New York I found one that featured rare performances by Charlie Christian.

On these bootleg recordings (a few of which are seen left) there was often little or no discographical information. There was just the music – magnificent, mysterious and maddeningly obscure. The Charlie Christian LP I found featured the guitarist with big band leader Benny Goodman – Charlie's employer for nearly all of his professional career. Any time you heard Christian on the radio back in 1939, '40 or '41, you heard him as part of the BG Sextet. And that's the case here. I didn't know it until much later, but these recordings also featured some superb guest artists. Like Mary Lou Williams and Red Norvo.

But there's more. Charlie Christian was the featured artist with Benny Goodman on the first side of the bootleg. On Side 2, it was modernist tenor player Wardell Gray who soloed with The Ray. When I bought the record back in 1974, I'd never heard of Wardell. I was looking for Charlie because I was learning to play guitar and wanted the cop some licks (ha!). But the smooth, fluid stylings of the tenor player, below, on the second side caught my ear right away. And Goodman's ensemble sounded nothing like it did on the 78-rpm discs my Dad had – this was modern music. Bop! 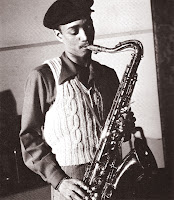 So here are Charlie Christian and Wardell Gray performing as members of various Benny Goodman units, and lending a distinctly modern sound to the clarinetist's music. The arrangements on many of the Wardell tunes are by the visionary Mary Lou Williams and tenorist Georgie Auld is featured on the Christian sides. You'll see the album's cover has a nonsensical title with incorrect tune titles in some cases, replete with Swedish translations. This sort of malarkey was typical of bootlegs from that period. Also, there's no image of the back cover because it was blank.

A blog note: I might do a series of these bootleg records in upcoming months. I have an interview with Charlie Parker by Marshall Stearns that I think you'd enjoy (I don't believe it's available anywhere else on the web). And Boris Rose, the source for much of the '70s bootleg material, has a certain fascination for amateur hoarders like myself. 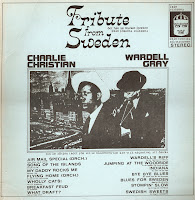