Maybe you've already read about this, and maybe not. If you haven't, and you're an old record junkie like me, you're in for a treat.

The Library of Congress has recently debuted an online audio service called the "National Jukebox." More of a massive archive than a jukebox, the site has thousands of vintage recordings from the golden era of acoustic sound recording, from its earliest days up to the mid-1920s. All of them can be sampled and/or downloaded for free – a deal that can't be beat! 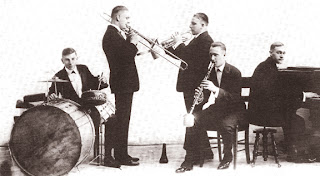 All the music comes from the Victor archives (the licensing agreement must equal Jarndyce vs. Jarndyce in complexity) and, while it doesn't include much of worth jazzwise (unless Paul Whiteman is your boy), there are lots of interesting gems. One such item is "Bluin' the Blues" by the Original Dixieland Jazz Band – a tune the LOC lists under blues though we all know it more correctly belongs in jazz category. The ODJB, above, headed by trumpeter Nick LaRocca, made what has been described as the first real jazz recording for Victor in 1917 (that would be "Livery Stable Blues"). Though they've largely been dismissed by historians and critics as more of a novelty act than a real jazz band what with their propensity for "hee-haw" sound effects, LaRocca claimed right up until his death in the late '50s that they were in fact the originators of the music that we love. While that assertion rivals Jelly Roll Morton's in its extravagance, LaRocca's syncopaters could play and do deserve some credit. To wit:

Though I can't compete with the LOC's collection, I'm no slouch when it comes to obscure sides. So here's my own offering, a rareity I picked up last week when a friend tipped me off to an old house that was being renovated and had on its porch some boxes filled with vintage 78 rpm discs. The hand-lettered sign above them said "Free – please take!"and I did just that. One dusty record was "John Henry Blues" by the New Orleans Blue Nine, an unknown group that Brian Rust lists as "probably a Negro band." The tune was recorded in New York in April of 1921 for the obscure Radiex label. The composition is by W.C. Handy, and the guys in the band are clearly schooled musicians, playing their ensemble parts with precision. Whether any of them had ever seen the Big Easy is questionable, and there are no real solos, but the overall effect is one of the music making the transition from the ragtime brass band style to the more familiar jazz orchestra configuration. Trumpeter Bob Shoffner was rumored to have played with the NO Blue Nine on later dates. The sound is funky, but definitely authentic. Here 'tis: 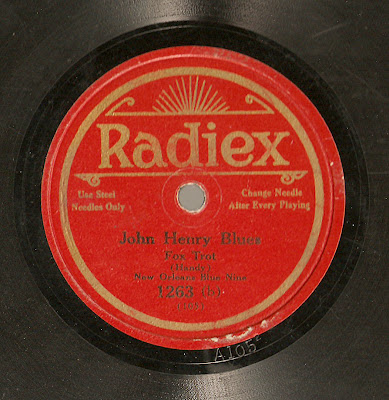