It's my firm belief that the familiar swing of jazz – as we understand it today – came to us from the Tom Pendergast's Kansas City of the 1930s. Specifically, from the men and women who created an original sound in the city's many night clubs, dance halls, speakeasies and dives. Four beats to the measure never swung so hard.

If you're not convinced, I offer this posting as as Exhibit A. It's from Decca Records' 1957 series of regional reissues (the "Chicago Jazz" LP posted a while back is another) and it features a veritable who's who of KC players. Most of these recordings were originally done in New York over a seven day period in 1940, so they come from a time when the heyday of Kansas City jazz had largely passed. But present are many of the original Blue Devils plus pianists Pete Johnson and Mary Lou Williams. The real treat is the two sides from Basie's superb composer and arranger, trombonist and guitar man Eddie Durham.

You hardcore collectors certainly know that all these tunes are available elsewhere – especially the familiar Basie numbers. But having them all in one place is a treat. You get a real feel for KC's hotbed musical environment. The two titles by Mary Lou are fairly obscure and feature terrific work from Shorty Baker (pre-Ellington, of course) and driving solos from long-forgotten Andy Kirk tenor star, Dick Wilson. Ms. Williams herself is in full command of the keyboard and her arrangement of "12th Street" occasionally foreshadows the developments of bop several years hence.

The standout for this posting has to be the rare Durham sides. Not only do we get Eddie's advanced electric guitar work, but Buster Smith demonstrates why Bird's sound was compared to his in Parker's early days. And catch the soli toward the end of "Little Girl" – fabulous Durham writing and very tight playing by the guys.

Note that the liner notes for this LP refer to its selections as "dance compositions." Exactly right. This was music to move your feet to, and if you're like me your toes will be tapping. This is the music that taught the rest of the jazz world to swing. Mixed in, of course, were some of the greatest jazz statements by some of the music's greatest practitioners. You only have to catch the bookended solos by Hershel Evans and Prez on "Doggin' Around" to understand that.

So, download and roll back the rugs! As always, these tunes were ripped from the original vinyl with, in this case, no cleaning of the sound. 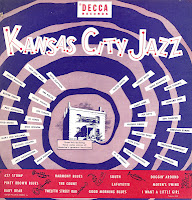 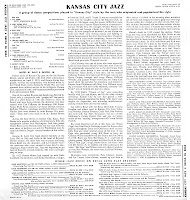