I have a truckload of jazz ephemera from my days living in Chicago and New York, and I've been thinking I should post some of it here on Gems. Even though this is supposed to be a blog that shares rare and unusual recordings with its visitors, every now and then I can't resist posting some visual stuff. So here is a selection of posters and flyers from some noteworthy but mostly undocumented jazz performances. I thought for this first installment I'd concentrate on Chicago and shows by members of the revolutionary Association for the Advancement of Creative Musicians.

Many of these concerts I attended, and all of them are a testament to the dedication of some great players who were in the music solely to advance tradition, art and culture. By the time I was in Chicago, the first-string AACMers had mostly decamped to New York. But there remained some very fine players, some of whom are represented here. To wit: 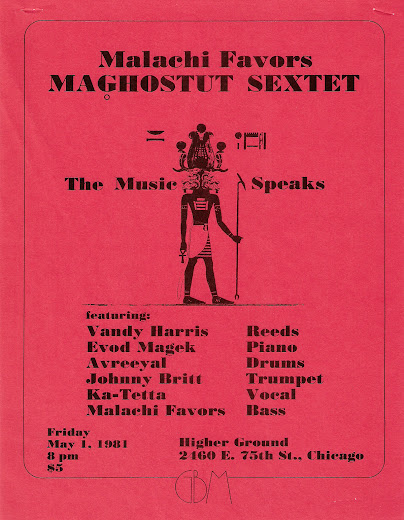 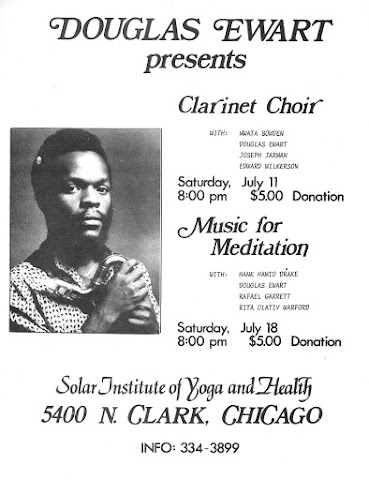 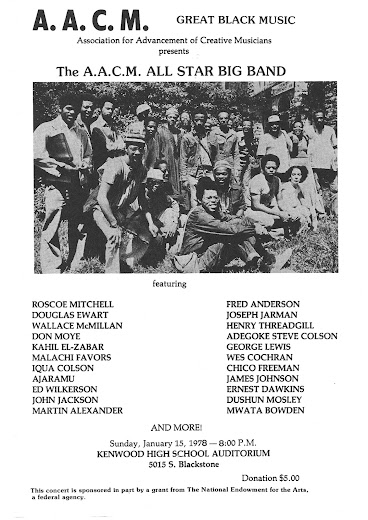 That's just a sampling of some of the music that could be heard in Chicago in the late '70s and early '80s. Audiences for creative music were small but enthusiastic, and there were a number of sympathetic journalists who respectfully reported on AACM doings for the Chicago Reader, Down Beat and even the straight dailies. While I was a student at the U. of C., I attended as many shows as I could and experienced many memorable moments.

Occasionally a recording of one or another of these concerts would come my way, and I thought since this is indeed a music blog, I'd share an excerpt from one of them. It's from another University of Chicago show, done on February 11, 1977, and features Don Moye's Malinke Trio. The late reed player and composer, Julius Hemphill, is the trio's prominent soloist for the opening part of the performance. Next comes a bass-and-drum duet demonstrating Favors' big sound. Then it's Moye who takes over with an extraordinary display of his precussion skills on conga. I doubt this group existed beyond this one performance, but the cohesion exhibited is a testament to the musical prowess of the players. Don Moye later had a drum ensemble called Malinke, but this trio may be one of the first examples of a Famoudou group with that name.

A caveat: The recording quality of this aged dub is not the best. I've doctored it a bit, but there's still some wow-and-flutter, background noise and other audio flaws. The music, as always, is amazing so I hope you'll pardon any sonic imperfections.