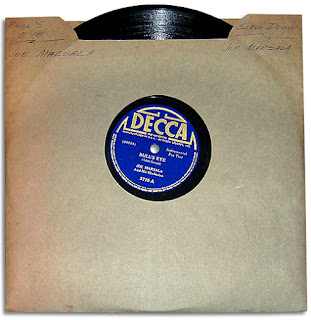 Here's a brief addendum to the Joe Marsala/Adele Girard post of a few weeks ago. A local church sale yielded up this gem, complete with a lovingly hand-lettered sleeve. No doubt the previous owner was one of us – a collector of fine recorded sound, I mean.

It's a Joe Marsala date for Decca from March 21, 1941, done in New York City shortly before the country's entry into World War II. Most of the players would soon be gone in the draft, and within a year nearly all studio activity would cease under the Petrillo recording ban. But in early 1941, things were humming along, and Marsala did a number of solid sessions for Decca.

The title of this piece is "Bull's Eye," and I post it here because it's an Adele Girard original. It seems to draw from the classical repertoire, and even quotes a very familiar theme (so familiar, I can't think of where it comes from at the moment). Adele solos nicely, as do Joe and his brother Marty, as well as mysterious tenor man John Smith (unknown to me, and with a name like his, completely unsearchable on the interwebs). Also of interest is 20-year-old drummer Shelly Manne, who gets in some very nice fills (and starts off the piece). For the record, here's the personnel: Marsala, clarinet; Marty Marsala, trumpet; Ben Glassman, alto, clarinet; Smith, tenor; Dave Bowman, piano; Girard, harp; Carmen Mastren, guitar; Jack Kelleher, bass; and Manne, drums. It's scratchy, but heck, what'd you expect from a 70-year-old bit of phonography?