There are a few musicians in the jazz idiom who have labored for decades playing music of depth, integrity and panache without ever achieving fame or fortune, or even much notice. One of those benighted few was pianist Art Hodes.

I originally heard him on a series of reissues that Blue Note (by then owned by Liberty Records) put out in the early '70s. The label had originally recorded Hodes in a series of small group settings – Art Hodes' Back Room Boys, Art Hodes and His Blue Note Jazzmen, Art Hodes' Hot Seven, Art Hodes ' Chicagoans – and the reissues showed him to be an uncomplicated though swinging player, a guy who clearly had a profound understanding of the blues. This was when I was in New York. Shortly afterward, I moved to Chicago, Art's hometown.

In Chicago, I developed a real appreciation of the blues – both the urban electric kind, and the kind played by Little Brother Montgomery, John Davis, Erwin Helfer ... and Art Hodes. I can't recall if I saw Art in person back then, but I believe I may have caught him as part of a larger ensemble in one of the early Chicago Jazz Festivals. He was still alive then and actively performing.


While there, though, I did come across a couple of Hodes' LPs from the 1950s – in a recycling station on the city's South Side. There, amidst all the dumpsters of sorted colored glass, tin and aluminum cans, newspapers and magazines, were half a dozen boxes of long-playing records. Perhaps they'd been abandoned by some evicted jazz fan who'd fallen on hard times? I don't know, but there were some real treasures in those boxes, and the Hodes LPs were two of the best. The one included in this post is the better – and rarer – of the two.

"Mostly Blues" captures Art Hodes and a small group playing familiar tunes and a number of blues, just as the title suggests. The band, Chicagoans all, features a then-young guitarist named Marty Grosz (listed on the label as "Milt"), one of the very few rhythm guitarists who solos using chords. I saw him play live with tenorist Eddie Johnson and drummer Barrett Deems, and he was quite amazing. As he did then, he plays acoustically here and is very impressive. Also in the band is Freddie Kohlman, a fine traditional drummer originally from New Orleans but living in Chicago at the time of this date. He'd worked with Albert Ammons and Earl Hines prior to hooking up with Art.

The revelation, for me anyway, is bassist Truck Parham. Truck (born Charles Valdez Parham) was working as the doorman at the apartment building of a friend of mine when I was living in Chicago. I never met him, but I knew that he'd been an integral part of Windy City jazz history from the git-go, working with everybody from Roy Eldridge to Earl Hines to Art Tatum. He'd even studied with Walter Page. What strikes me about his playing here is how modern it sounds. Here's a gent who started playing bass right around the time bass players were switching from tubas to strings, and yet he sounds at moments like Oscar Pettiford or Ray Brown. He even bows his way through several choruses on a few of the tunes.

One last thing. Art Hodes not only played wonderful piano, he also wrote as good as he played. His prose style was like his keyboard approach – simple, straight-forward, honest and insightful. He wrote a column called "Sittin' In" for Down Beat magazine for about a decade, and here's the one from the August 26, 1965 edition. It's Art's take on racism in music, a topic that still resonates today.

As always, these files were ripped from the original vinyl with only a gentle cleaning of pops and clicks. Be forewarned, there is some slight surface noise. 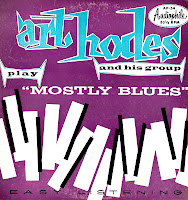 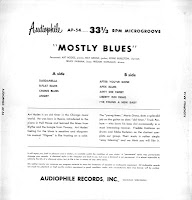