This posting starts off our Piano Series.

Like Oscar Peterson a generation later, Kenny Kersey was a Canadian pianist who was quite active on the American jazz scene. From the mid-thirties to the late fifties he worked with the orchestras of Lucky Millinder, Andy Kirk and Cootie Williams, and backed singers of quality like Billie Holiday. As a sideman, he made innumerable small group recordings for independent labels, playing with many of the jazz greats. Oddly though, he recorded only a handful of sessions under his own name. This very rare Savoy date was the first of those.

Kersey's playing here is very much in the Teddy Wilson/Art Tatum mold, showing none of the influence of bebop. Though Kersey is often given credit – along with Clyde Hart – for being a stylistic bridge between swing and modern piano playing, his performance on these sides are solidly in the swing tradition. Jack Foster's guitar work is fleet and complimentary, evoking the styles of Oscar Moore and Al Casey. Ironically, this date is his only known recording session – and nothing more is known about him. Billy Taylor is perhaps best known for his stint with Duke Ellington where he was one of two bass players – the other being the great Jimmy Blanton.

This 45-rpm record came from a trove of LPs – mostly jazz – that a friend of a friend who cleans out homes for extra income found stored in an attic. She knew I was a jazz maven and offered to sell me the lot for a pittance. I, of course, took her up on the deal, and this Kersey disc was one of the more interesting items included in it. I'll be featuring other gems from the lot in upcoming posts.

As always, ripped from the original vinyl with no enhancement other than a mild cleaning up of minor clicks and pops. 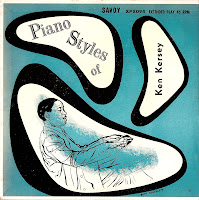 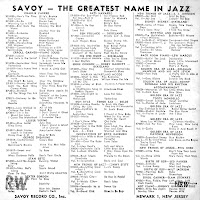