Here's Earl Hines after he'd abandoned the big band and had quit Louis Armstrong's first all-star group. He was working mostly in trio and quartet settings at the time and, judging by trade magazines from the period, was keeping a pretty low profile.

Columbia Records was experimenting with long-playing 33 1/3-rpm records, and decided to issue a series of "extended play" albums – 10-inch discs – featuring pianists. Hines was one of them. What was unusual about these records was that there were no pauses or separations between tunes – each side of the EP was one continuous performance.

In keeping with the marketing angle, the performances on these albums are unchallenging and fairly perfunctory. But there are stellar moments, and Earl Hines demonstrates his great skill on "I Hadn't Anyone But You" and breaks into some surprising Latin rhythms on "Diane."

This album is a thrift shop find, one of several interesting records discovered among hundreds crammed into a shopping cart doing duty as a record rack. It was hell to look through but well worth the effort, as it turned out. 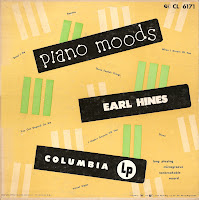 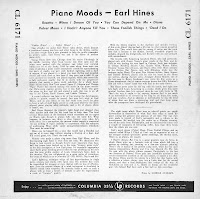