Predicting the future is never easy. Predicting the future of this music we call jazz is darn near impossible. How many times have we heard "the big bands are back"? Or that X (insert "Dixieland," "soul jazz," "psychedelic," "fusion," "hip-hop," etc.) is the next big thing? Remember the Fender Rhodes? Steinways were the keyboard of the past. Anthony Braxton was the next Charlie Parker one year, unemployed and scuffling only a few years later.

So your guess is as good as mine when it comes to jazz's destiny. Who could have predicted Wynton Marsalis? Not me.

But back in the late 1940s, jazz's leading impresario took a stab at jazz prognostication. Norman Granz decided to issue an album that would feature some of the music's finest talents and would offer a glimpse not only of the contemporary scene but also of what lay ahead for jazz. To grab the public's attention, Granz planned to market this recording as a special collector's edition, limiting the total pressing and selling it at a premium price. The records would be packaged in an elegantly designed case, accompanied by detailed notes and beautifully executed photographs by Gjon Mili of the artists involved.

Released in early 1950, "The Jazz Scene" went for a stiff 25 bucks and was capped at 5,000 copies, with the stipulation that "no copies will be available after the first edition is sold." It was received with accolades by the jazz press and got a special two-page review in the industry's unofficial pub, Down Beat magazine. To increase the album's appeal, Norman numbered and signed each copy. Buyers were secure in the knowledge that the music contained within was authorized and approved by jazz's Sol Hurok. The fans regarded the album as a must-have, though for many the price was prohibitive.

A portion of the music on the "Scene" was provided – no surprise – by members of Granz's stable of artists. Among them were Charlie Parker (recently signed), Lester Young, Bud Powell and Flip Phillips. Norman also recorded non-Mercury artists Willie Smith, Ralph Burns, Neal Hefti and George Handy. He seemed to have favored the arrangers on the album, hinting that at least some of jazz's future lay with writers rather than with improvisers.


Of the compositions, George Handy's "The Bloos" stands out. It's at once anachronistic and startlingly original. It couldn't be written today, but it's unlike anything being written in 1949, too. Michael Levin called it a "satire" in his Down Beat review, and that seems about right. There are no solos, and it's the arrangement that gets top billing. Handy retired from music not long after this, claiming that the "music biz and all connected stinks."

Of the Parker contributions, "The Bird" is a piece based on "Topsy" (if I recall correctly) that runs almost five minutes – the longest performance Bird ever recorded in a studio setting. It's good, but not first rate Parker and kind of peters out at the end. According to Phil Schaap, Charlie was upstairs making "The Bird" when Neal Hefti was downstairs with the orchestra recording "Repetition" and "Rhumbacito." Parker stopped by on the way out of the studio and asked if he could sit in on the former tune. The result was Bird soloing over Hefti's arrangement during the latter half of "Repetition." A spontaneous collaboration and it works.

The Ellington sides are really features for Harry Carney and an unnamed string section. Duke figures in only as the composer of the two tunes. My understanding is that Ellington did not like Granz and pretty much had nothing to do with him (until late in his career), so for Norman to credit these tunes as he does is a bit of false advertising. That said, Carney sounds great, and it's nice to hear Billy Strayhorn tickle the ivories.

The true gem on the album is Coleman Hawkins' stellar "Picasso." According to the notes, the Hawk spent many hours formulating this free-form, solo saxophone masterpiece, and it shows. Hawkins did two or three other solo improvisations after this first effort, but "Picasso" stands out as a remarkable document by jazz's elder statesman of the tenor sax. If you've never heard it before, you're in for a treat.

The album was originally released on 78 rpm discs with a Mercury/Clef imprint. Despite Granz's pledge, the recordings were eventually issued again (and again), first on various LPs and more recently on CD. These dubs were taken from an American Recording Society release. The ARS was a record club of the variety popular back in the '50s, and it had a special deal with Granz to reissue Clef and Verve releases for its members. Each ARS record came with detailed liner notes – something the originals often lacked. 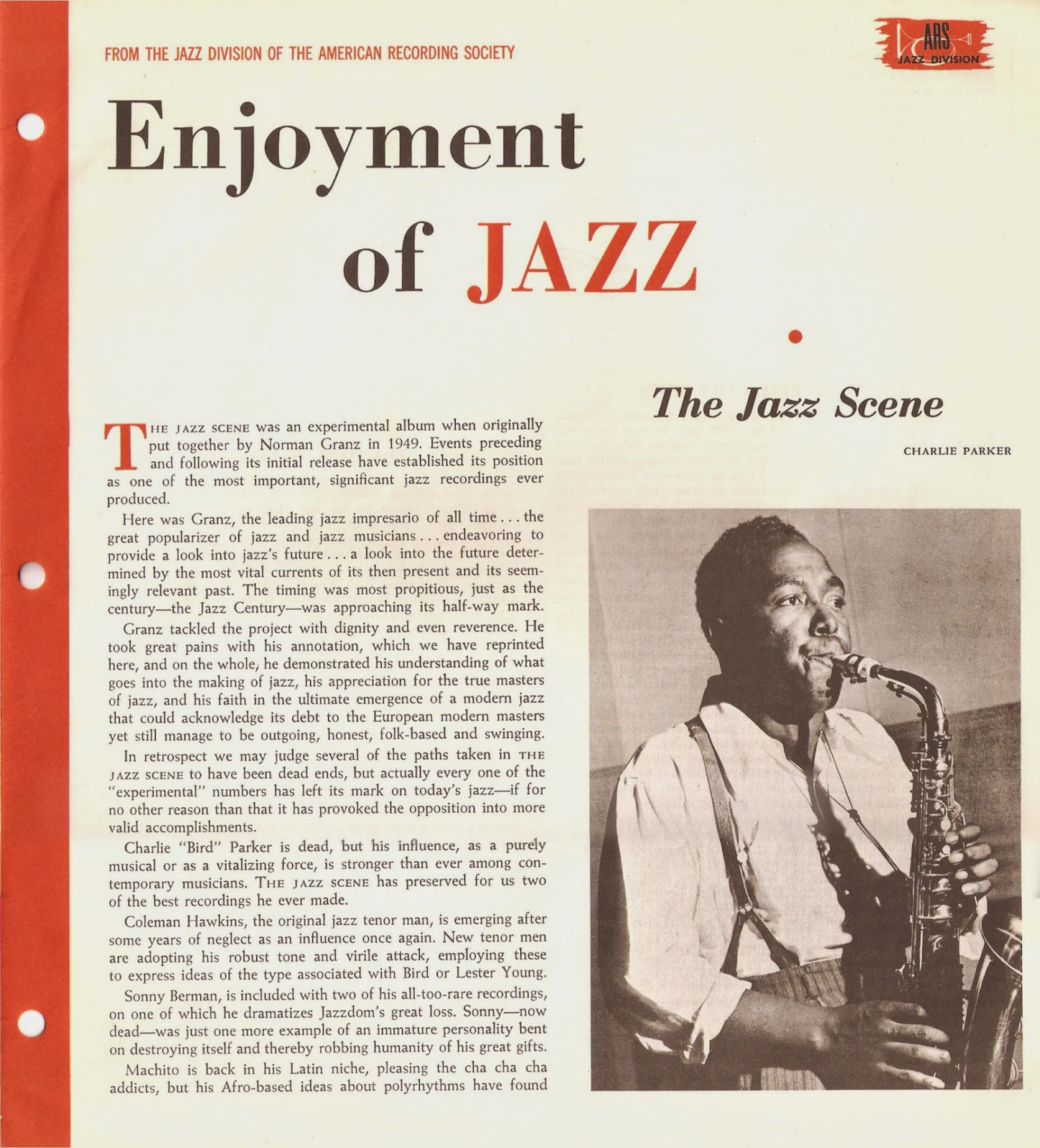 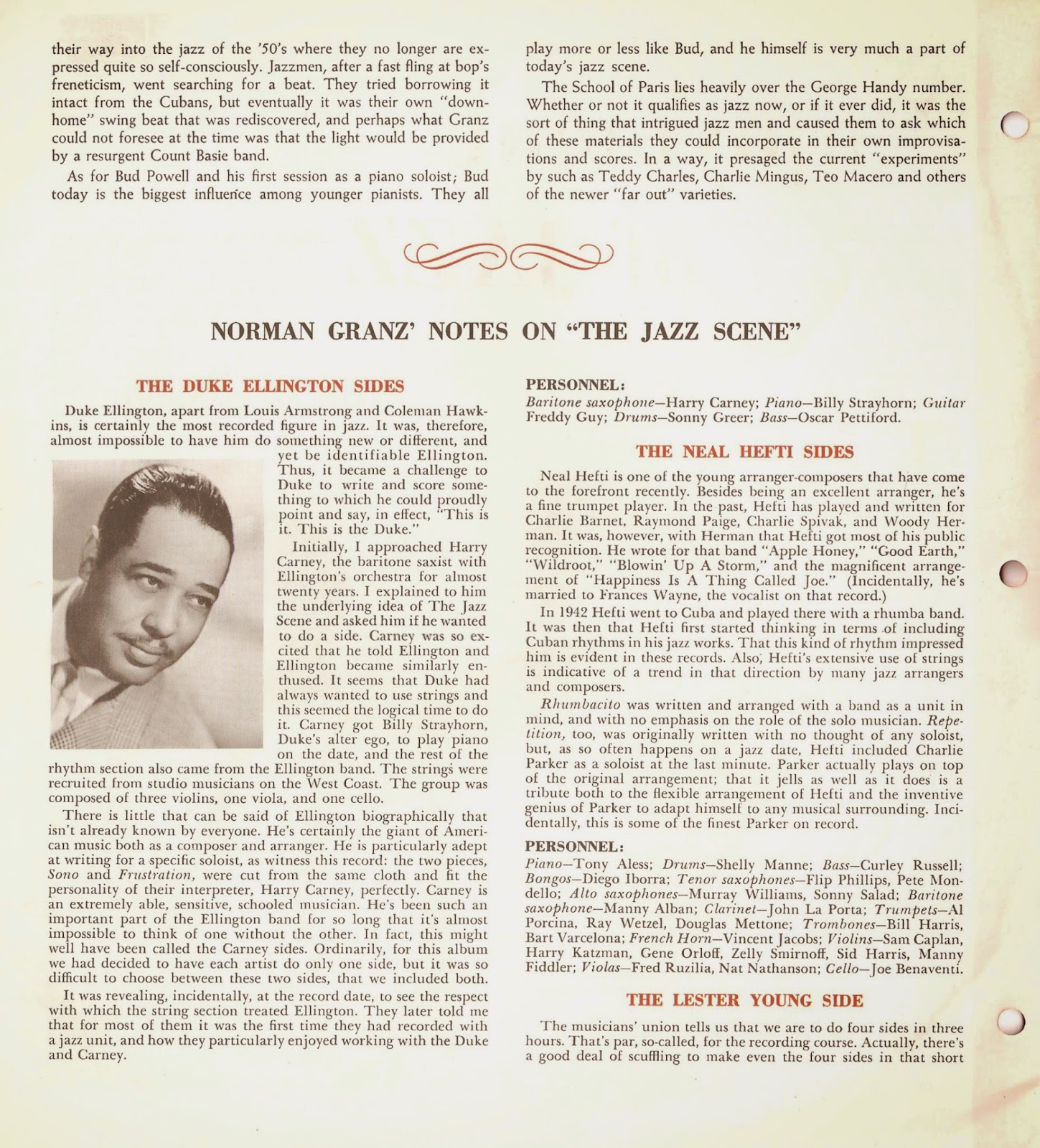 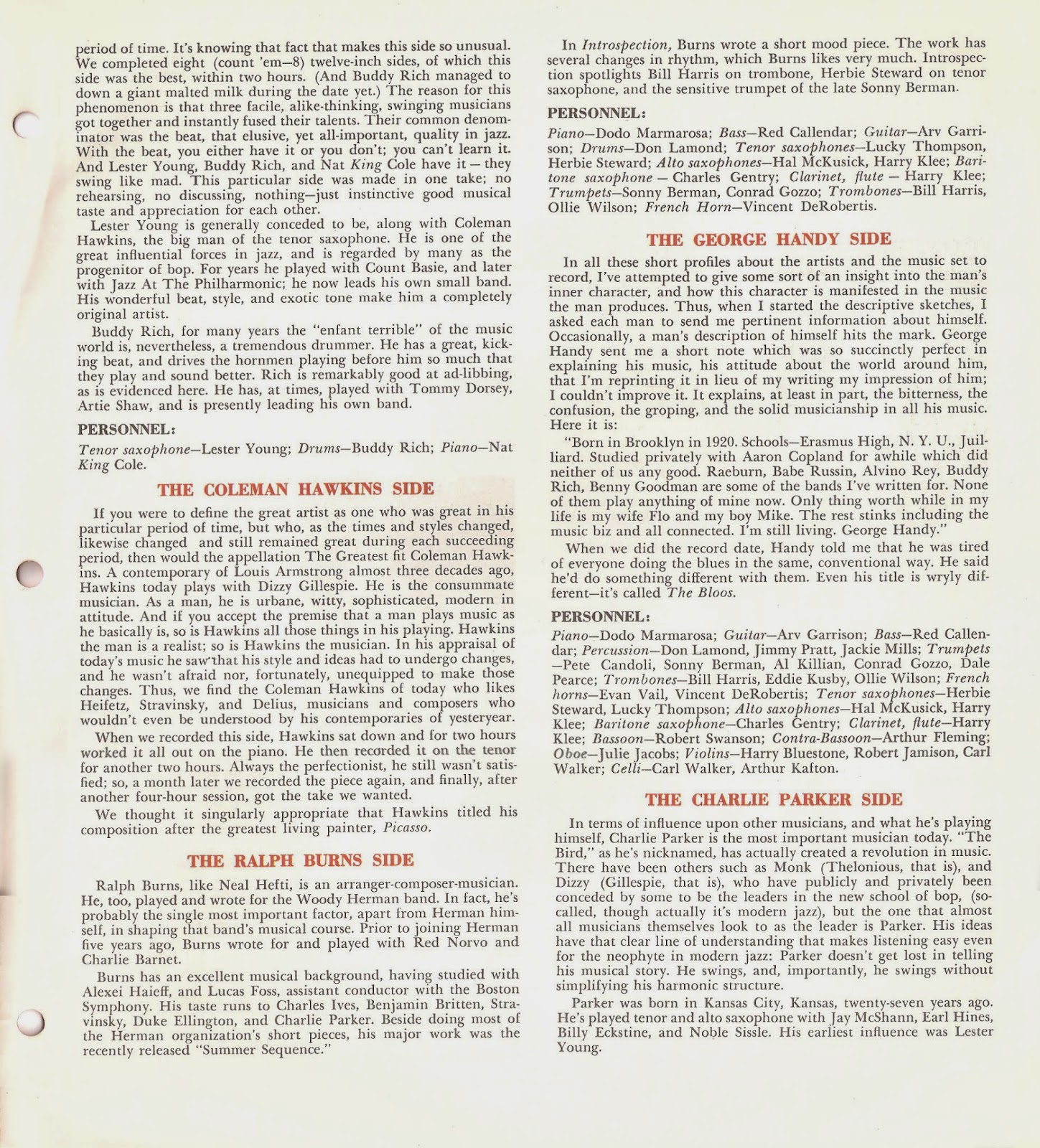 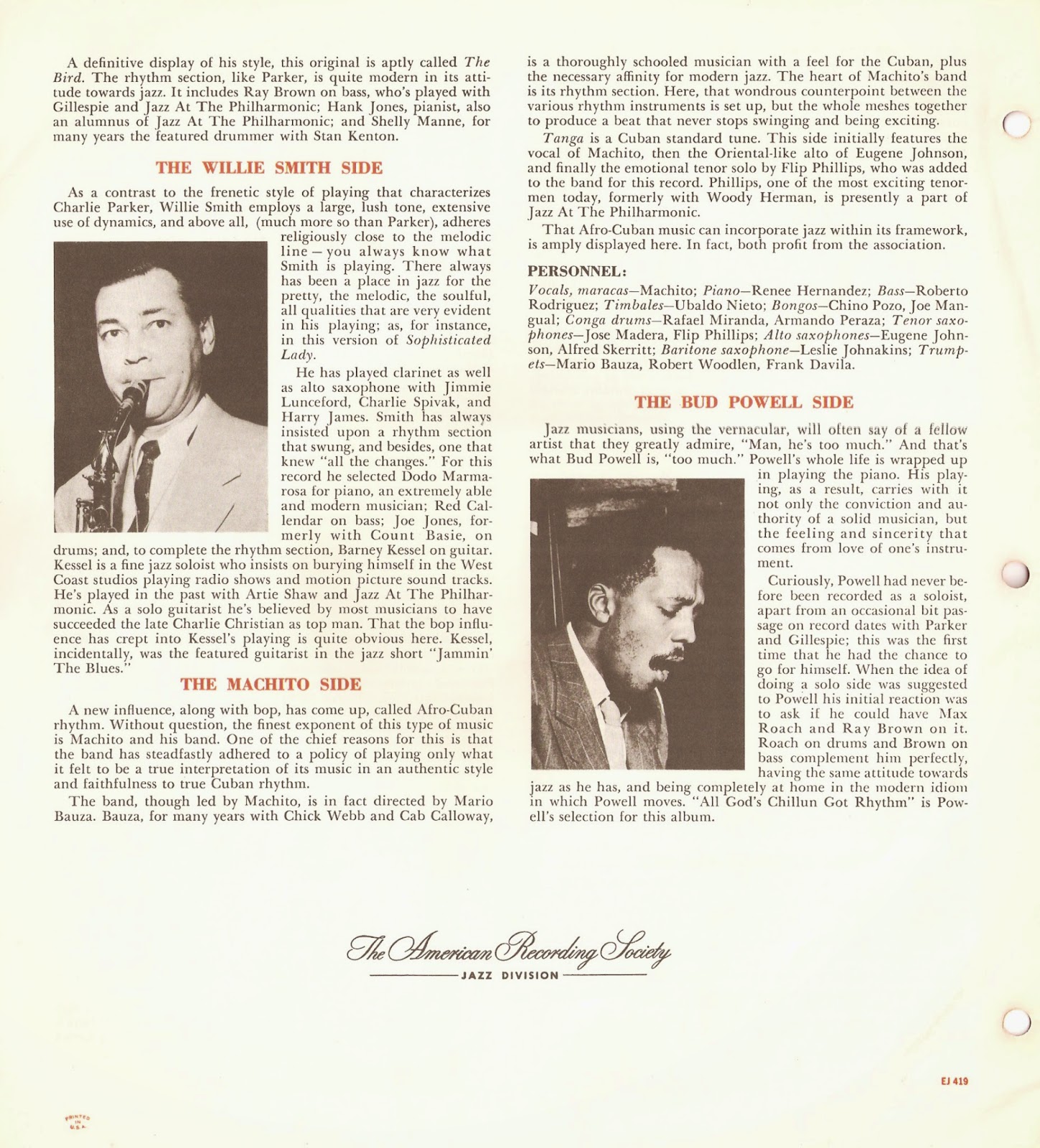 The liner notes for the ARS release of "The Jazz Scene."

The sound quality of this album is very good considering its age. We've cleaned things up here and there, and you may notice the occasional click, but mostly these files are broadcast quality. As always, they were taken from the original vinyl. 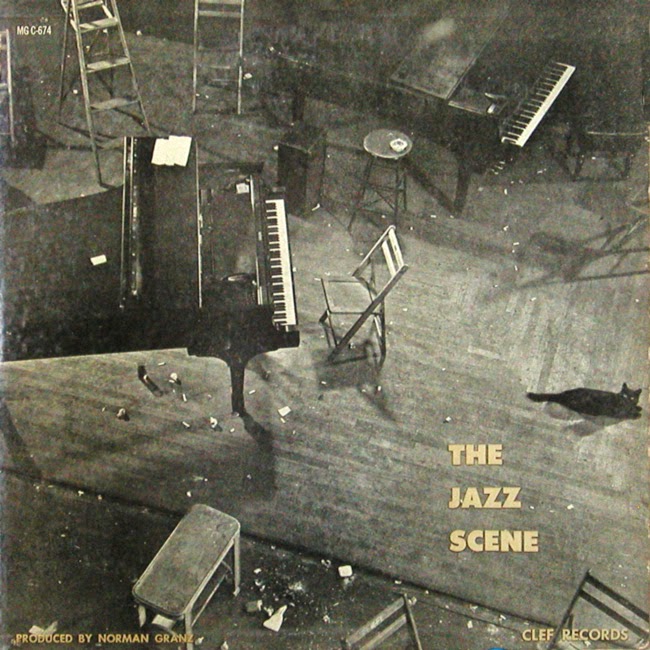 2. I Want to Be Happy
Lester Young with Nat Cole, Buddy Rich