The re-election of President Barack Obama reminds me of a time when I was directly involved in presidential politics, and that spurs me to offer this recording by the great Lionel Hampton. The connection may be a stretch, but I'll go with it since it's nice to have a logic (however contrived) behind these musings here on Gems.

In 1970, I worked for the late Senator George McGovern's presidential campaign, going door to door in the Syracuse, NY, region in an effort to get out the vote. Like many college kids from that era, I was firmly against the war in Viet Nam and believed that George would end it once elected. My canvassing partner and I were assigned to one of the poorer neighborhoods and the work was anything but easy. People answered our knocks – when they answered at all – with half-opened doors and suspicious looks. Nobody wanted to hear us talk about the Senator from South Dakota; they just wanted to get the two white kids from somewhere else off their front porch.

The experience impressed upon me just how complex the American political landscape can be. Another example could be found in Lionel Hampton's very public support for former Vice President Richard Nixon, McGovern's opponent. Back then I was just beginning to explore this music called jazz, and the idea that someone of Hamp's stature could support a war-mongering honky square like Tricky Dick just defied all logic. Of course, my eighteen-year-old political reasoning was anything but nuanced. But I really had trouble getting my head around the fact that a jazz giant was embracing a guy who seemed to be against everything that jazz stood for.

Of course, McGovern went down in one of the worst defeats anyone in a presidential election has ever experienced. Nixon went on to run afoul of the Watergate caper and also came up a loser. Our bumper stickers in Boston read, "Don't blame me – I'm from Massachusetts."

But Lionel Hampton went on to play music for another three decades, swinging just as hard as he ever did. He was clearly a survivor, and that spoke volumes about his decision to go with the Repubs. That and the fact that his politics were pretty conservative to start with.

There's nothing political about this posting. It's just Hamp and the guys blowing for a rowdy crowd at a dance at Chicago's famed Trianon Ballroom. This is how live-in-concert recordings should sound – the crowd is vociferous, hip and paying attention. And Hamp and his men rise to the occasion. No great soloists here – Jay Peters and Jay Dennison are featured, and neither is exceptional. But they have a grand time and, if you can overlook Dennison's repetitious "Casbah stuff," you will too. And Hamp's solo turn on "Stardust" is worth the download all by itself.

As always, these tunes were ripped from the original vinyl, in this case a mono veteran of many years of repeated playings. There was a lot of surface noise that had to be cleaned up, so you may notice some minor digital artifacts here and there. But play it loud, roll back the rugs and pretend you too are at the Trianon ... 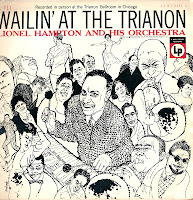 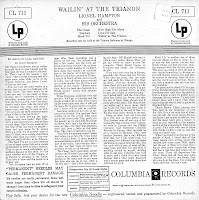 Wailin’ at the Trianon

Lionel Hampton and his Orchestra