I was rooting around in a now-defunct East Village record store (not far from the then-mighty Tower Records) back in the '80s on what had to be the hottest day of the year. I mostly went in to take advantage of their delightful air-conditioning, not expecting to find anything of interest amid their big U-2 and Prince displays. But then, in the 99-cent bin, I came across a half-dozen LPs with hand-decorated covers that caught my eye. Several of them featured the legendary cornetist Butch Morris. All of them included a drummer named Ar. Penck. Who?


The music on these records was a mix of Downtown and free jazz styles – self-consciously minimalist, sly, utterly hip. I loved it. But a painter friend who was into the new music scene rolled her eyes when she saw the covers. "Ugh," she said. "Penck!"

"He's some German – an artist, or so he thinks. A doodler. Those are his scribbles on the covers." I had to admit I didn't think much of the LPs' cover designs. "And those records?" she added. "They're nothing but vanity projects. He just bought himself some sidemen and got a grant to put them out." She turned up her nose.

"But they've got Butch on them. And they sound good to me," I protested. I was feeling a little defensive, but my friend wasn't buying it. We agreed to disagree.

The records were good, I knew that. I mostly wanted them because of Butch Morris.

Butch was the first jazz player I saw when I moved to New York City in the early '80s, and by then I knew him pretty well. His cornet playing was absolutely magnificent, unlike anyone else's then or since. And he was just starting his large-scale "conductions," whereby he would improvise a composition using prearranged combinations of instruments and sound patterns cued by a series of gestures. He used his musicians the way Ellington did, but he did it in live performance, shaping the piece even as he heard it evolve. Tres cool!

My musician wife occasionally played in Butch's large ensemble, and I got to know him through her. When he learned that I was an artist and modelmaker, he asked me if I'd help him with a project he had in mind. He was working on a new suite of pieces for an upcoming recording for the Sound Aspects label, and he'd had an outfit in Switzerland create a number of music box mechanisms that played the suite's signature motif, a melody called "Nowhere Ever After." Would I be interested in helping him create a production music box to hold the device? Oh, yes, I would!


I worked with a neighborhood furniture shop to create a simple wooden box that when picked up would play the melody. One side held the mechanism and the other provided access to the winding key and left space for Butch's "dancing notes" logo. I priced it out at a very reasonable buck-and-a-half per box, and presented a prototype version to Butch at a conduction performance at Cooper Union. He seemed delighted.

After that, I saw Butch use the box several times in performances of the new suite and I heard that he'd been showing it around. But nothing much happened with the planned production of the music boxes. So I decided to create a one-off music box to really show him what I could do.

I was working primarily as a sculptor of detailed miniatures in those days, so I created a three-inch-tall figure of Butch from a photo I had of him conducting. I built a red oak box to hold it and the music mechanism, and gave the little model a movable arm. When the music played, the miniature Butch conducted. It was like a hip version of the little girl jewelry box with the dancing ballerina!

At another conduction performance a few months later, I showed Butch my creation. I was excited, hoping he'd be pleased with my elaborate treatment. But it was not to be. I could tell that Butch, though he was politely complimentary, was a bit put off. That confused me.

It was my friend, the woman who had dissed Ar. Penck, who later cleared up the mystery. Butch, she said, saw my music box with the little figure of himself inside it as a coffin. The thing struck him in that moment as an ominous sign of impending mortality – his. Not a good thing.

I have no idea if that was how Butch really felt, but the music box production plan was never mentioned again, and not long afterwards I left New York City for the Catskills. I still have the "coffin" music box, and Butch Morris is still very much alive and kicking, so I guess he was right to abandon the project – with me, at least. He did have a music box created by someone else, and you can see it here.

Back to Penck and his musical pals. Here is one of those "vanity" records with Butch. Filling out the ensemble are free jazz veteran Frank Wright and the Wollny brothers. The music is a marvelous amalgam of creative, free and downtown styles. The record was probably the result of an afternoon in the studio, a spontaneous creation that is a testament to the skill of the musicians involved. And Butch's skittering cornet is still one of my favorite sounds in new music.


As always, these files were ripped from the original vinyl with, in this case, no cleaning of the sound. 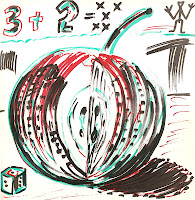 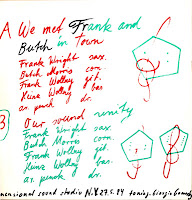 1. We Met Frank and Butch in Town
2. Our Sound Unity