Ever have a very bad day that suddenly turns into a very good day? It almost never happens that way, but I well remember one that I had just like that.

This was back in my scuffling days, when I was freelancing as an illustrator and paste-up artist. Had I been living in New York City, this might have been a lucrative way to spend the day. But I was light years from the graphic epicenter of the world, living instead in suburban Connecticut. I'd just gotten married, needed money and had no work. There wasn't any work, of course. Not in the Nutmeg State anyway.

But eventually I did find something. There is a very well regarded, high-end magazine publisher located in Newtown, and in the early '80s they were just getting started. They'd acquired an old farmhouse and had retro-fitted it as offices and a graphic studio. They needed occasional help finishing up mechanicals for their woodworking title. I got the gig.

My first day there they parked me at a drafting table and handed me a massive stack of boards in various states of incompleteness. The art director, who was nice enough, gave me some notes she'd made on fixes and changes, and then disappeared. I never saw her again the entire time I was there.


Meanwhile, a parade of editors and writers drifted in and out of the studio, yucking it up while grabbing endless refills at the coffee maker. No one spoke to me or even seemed to know I was there.

At 1 p.m. a huge buffet lunch was brought in and the editors and writers crowded around it for the better part of an hour before wandering off again, leaving only empty cartons, greasy paper plates and crumpled napkins. I began to wonder if I was the only one doing any work in the place.

The comings-and-goings continued throughout the afternoon, but they were now focused around the water cooler. By 6 p.m. I'd finished all the boards and was feeling a little light-headed from hunger. At that moment the managing editor – the guy who had hired me – walked in and looked surprise when he saw me.

"You still here? I thought you'd left hours ago. Didn't anybody give you anything useful to do?"

When you're just starting out in the world, your professional ego is a delicate thing. Mine was particularly so, and that comment just about wiped me out. I felt useless, unseen, a failure. I sulked my way out of the building and to my car. I anticipated a 45-minute ride home filled with comforting self-pity.

To ease my misery, I decided I'd stop in to a used bookstore I'd passed on the way to the job. It was near the intersection of I-84 and what was then Route 66, close to Southington. The place was set well back from the road in an funky old warehouse building. It was called the Printer's Devil Bookstore.

I went in, hoping for nothing more than a Rex Stout mystery I didn't already have. To my surprise, I saw they had an entire wall of records. A very big wall. Thousands of them!

I started looking, expecting the usual Herb Alpert/Ferrante & Teicher/Mitch Miller mix. But no – here was a Sweets Edison record on Roulette. And here a Sonny Stitt on Roost! A Clef Basie! A Harold Land on Imperial! I began to thumb through the discs feverishly.

By the time I'd done the lot, I had some 70 sides. They all seemed to be in mint condition, and all were choice stuff. A sign on the wall said the were a buck a piece, and that was fine with me. The hitch was that I only had a sawbuck in my pocket. Would they hold the records until I could go home, get my check book and return?

"Hi," said I hopefully to the attractive young woman behind the counter. "I, uh, wonder, could you hold these for me while I go get my check book? I'll be right back ..." I plopped the huge stack down on the counter.

"Oh, sure," she smiled pleasantly. "No problem. But I have to tell you something – we've just taken over the store." She pointed to a big banner hanging behind the counter. It read "Under New Management."

"All those records," she continued, "Sorry, but they're not the right price."

"Not the right price," said I slowly. "What, uh, is the price?" I knew it was too good to be true. Ten bucks a piece would be my guess.


"No, they're not the right price. Because we've just taken over the store, everything is on sale this week at 50 percent off."

That was indeed a bad day gone good. I rushed home, returned with a check and walk out of the Printer's Devil with a primo haul. Some of the LPs I already had, and those I sold to Integrity 'n' Music in Wethersfield where I more than made back the money I'd spent at the bookstore. By the way, if you're ever in central Connecticut and find yourself with an urge to look at records, you won't find a better place. You can check it out here.

In the score was an old Tampa Records release called "Modern Jazz Performances." Musicians on it included Herbie Harper, Bob Gordon, Oscar Moore and quite a few others. I was intrigued by it because the label also listed pianist Carl Perkins, and I knew that recordings by the short-lived Perkins were very hard to find (at that time anyway). The record was unfortunately missing its jacket (it was in plain cardboard sleeve), so there was no information on it aside from what was on the label. But the music was quite good, and though the pianist didn't sound like Perkins on all of the cuts, he was clearly present on some. 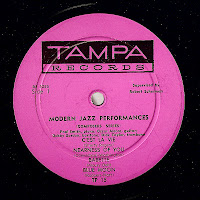 Many years later, I made an effort to determine who actually played on "Modern Jazz Performances." With the help of several discographies and a few web sources, I was able to piece together personnel and dates for the LP. It turns out the record is a compendium of material from other Tampa releases – nothing special if you happen to have those other records. If you don't, I think you'll find disc intriguing.

So here's one of those sides from my good bad day. The cover has been cribbed from an auction site and is somewhat funkier than my usual offering. And, this being a recording by a company with somewhat indifferent quality standards, the sound had to be clean up quite a bit. A caveat: There is one serious dropout toward the end of "Lover" where it appears a hapless gnat got pressed into the vinyl. I kid you not.

Nice to know that when things go wrong, they sometimes right themselves in rewarding ways ... 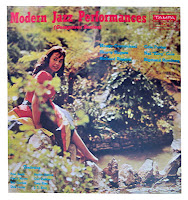 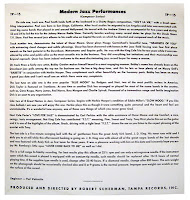