What can one say about a record that was pivotal in one's collecting experience? Words fail. For many of my generation, it was that first LP by the Beatles, or by the Grateful Dead or Jimi Hendrix. For me it was "New York Contemporary 5, Vol. 2." The beat of a different drummer, for sure.

It was on one of my first trips to New York City that I found this gem. I was a freshman at an upstate college, and a friend who came from the Bronx invited me home for the weekend. It was a five-hour ride to parents' digs, and I remember they lived in a featureless grey highrise right off the Major Deegan, but I was overwhelmed by the vastness of the urban landscape and by the endless activity contained within it. Very exciting!

We went out that Saturday night to a small club in Midtown to see guitarist Jim Hall and bassist Ron Carter. They had just formed a duo and I'd read they were planning to make a record. As a budding guitar player myself, I was eager to see as many jazz plectrumists as I could, and Hall – who was almost a myth at that time because he was so obscure – was at the top on my list.

The audience for the show was small – only a dozen or so patrons for what felt like a private performance. Hall and Carter said not a word during the entire set, only glancing at each other occasionally and then falling back into deep concentration as the tunes evolved. I was new to jazz and didn't recognize any of pieces they played, but I found the experience intensely cerebral and, truth be told, a trifle boring. A pal of my friend went with us to the show and he was a real jazz enthusiast. He later demonstrated on piano some of the things Jim Hall had played. That really amazed me. It also told me there were things in the music that I had yet to hear.

The next morning we went back into the city to check out the record stores. As I thumbed through the jazz stacks of one of the hipper Midtown disceries (I've forgotten its name, unfortunately), a striking cover caught my eye (that's how my purchases frequently happened back in the vinyl heyday). It featured a grainy, black-and-white photo of a quartet of intense young musicians in suits and ties, obviously in mid-performance, under huge block lettering that proclaimed the "New York Contemporary 5." I recognized Don Cherry's name – he 'd been with Ornette Coleman – but the rest of the players were new to me. On the back it said they played a tune by Ornette and another by Thelonious Monk. And the album was an import. I had to have it!

Back at the apartment, I put the LP on my friend's parents' massive console stereo and cranked it up (they were at work, fortunately). What came out of the speakers was wild, jagged, herky-jerky music, unlike anything I'd ever heard. Music that sounded like the electric blues I loved, but with an energy that was both visceral and intellectual. I played it over and over until my friend finally pulled the plug.

I now know that in that recording by the New York Contemporary 5 I heard what I'd missed the night before during Jim Hall and Ron Carter's set. I heard the sound that makes the blues so compelling – the "voice." Not actual singing, but the sound of human emotion with all its randomness, its moods, its braggadocio, its aggression, love and sadness. Hall and Carter were just too darn tidy. The music of Cherry, Shepp and Tchicai was anything but neat – it lived and breathed. I was hooked for life.

So here is that pivotal recording. For some reason, Vol. 1 of the Monmartre date was issued Stateside on Storyville and then on Delmark, while Vol. 2 remained available only as a Sonet import. As always, these files were ripped from the original vinyl and, in this case, had no cleaning of the sound whatsoever. 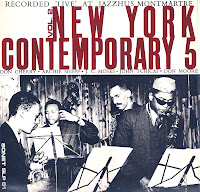 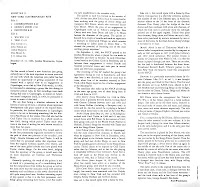