Bennie Green was a member of  Earl Hines' swinging orchestra when Dizzy Gillespie, Charlie Parker, Billy Eckstine and Sarah Vaughn also happen to be in the band. A Chicago native and DuSable High School graduate, Bennie later joined Charlie Ventura's "bop for the people" outfit and put the lessons he learned in sessions at Dizzy's house to good use. A solid improviser, Green's playing might be thought of as a link between the fluid swing style of Trummy Young and the ear-opening articulations of modernist J.J. Johnson. But Bennie's style, while exhibiting the superior technique and facility required of bop players, remains rooted in the fundamentals of the blues.

This record proves that point.

Recorded for Bethlehem December 1960, "Hornful of Soul" teams Bennie up with underrated tenorist Jimmy Forrest and alto player Lem Davis (who provides a nice original composition). Mal Waldron, a steady-working session man at the time, plays on a number of the selections and also contributes an original. His familiar ostinato-style soloing offers an interesting contrast to the bluesy work of the horn players.

A word about Jimmy Forrest. He had a big hit with a vamp blues called "Night Train," which many heard as a none-to-subtle reworking of Ellington's "Happy Go Lucky Local." His career seemed to falter following that early success, but he issued a number solid records on Prestige and later teamed up with Al Grey, recording some marvelous sides with that former Basie sideman. Jimmy seemed to have an affinity for trombonists. He's in excellent form here with Bennie.

The Bethlehem label, by the way, was issuing jazz sides willy-nilly around this time. Just why is a mystery, but many of them have since become classics. The company folded several years later, and when they did their catalog contained talents as diverse as Ruby Braff, Jerri Southern, Herbie Nichols and Charles Mingus. Some of Coltrane's formative work was documented on Bethlehem.

Where did I find this record? Back in the early '70s, I worked in a record store to earn rent money while I was in college. My store was part of a chain – Discount Records it was, owned by CBS – but our competition down the street was a locally-owned platter shop. They had a great selection of cut-outs there, and one day a truckload of deleted Bethlehem sides appeared. "Hornful of Soul" was one that caught my eye, and I laid down 69 cents plus tax to take it home. I've been digging it ever since, and now you can, too.

As always, these titles were ripped from the original vinyl with only a slight cleaning up of minor pops and clicks. 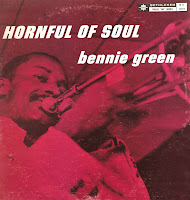 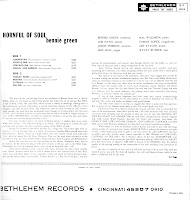