No real story to tell about this offering, other than it showed up on eBay and nobody but your interlocutor bid on it (which means it went for a buck). I knew about this recording by a trumpet and horn player named Tom Stewart, but I'd never actually seen a copy. The reason I wanted it? Soprano saxophone pioneer Steve Lacy is featured throughout. There are very few sides of straight ahead jazz with Lacy, and I was curious to see how he sounded in a semi-hard bop context.

No surprise that Steve swings. He'd studied with classic jazz player and arranger Cecil Scott and had played extensively in traditional jazz bands with the likes of Pee Wee Russell, Pops Foster and Red Allen. What always did surprise me, given Lacy's history, was that his post-Cecil Taylor bands have always sounded dry and a bit academic (at least to me). And a little Irene Abei goes more than a very long way. So how Steve Lacy lost his swing is a mystery, but he sounds great here.

Tom Stewart? I have no idea. How did Creed Taylor decide to record him as a leader for the newly-launched ABC Paramount jazz label? We'll never know. Not that he's not an accomplished player and arranger. It's just that he seems to have come out of nowhere and then returned there immediately after this 1956 release. The tunes are familiar to jazz listeners, and there are no originals from Stewart, but he may have done the arranging. In the liner notes, he says he got a Bachelor's in English Lit, but then decided to switch to jazz horn playing. Clearly he was not interested in making money.

Anyway, here's his magnum opus, replete with Lacy and Herbie Mann for good measure. The sound was a little iffy in places, so I've cleaned it up a bit. I think you'll find the files acceptable – and musically of interest. From the actual vinyl, as always! 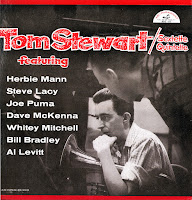 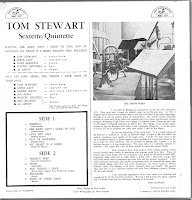