Every recording that has been posted here at Gems has artistic merit – at least, I believe they do. Some are unjustly obscure, others offer examples of extraordinary musicianship, some are simply fascinating curiosities. This album, though, is different from those. It not only has merit. I think I can say without qualification that it is, from start to finish, an absolute masterpiece.

"Inside Betty Carter" ranks right up there with "Kind of Blue," "Blue Train," "Blues and the Abstract Truth" and any other contemporary jazz classic you might think of. Why "Inside" has never received its due – and why it remains generally out of print – is one of jazz's great mysteries. In an effort to rectify this egregious oversight, Gems offers this download for your delectation and enjoyment.


Recorded by the enigmatic Alan Douglas, a producer who had worked with Eric Dolphy and who later got into hot water for altering masters made by Jimi Hendrix, this album originally came out on the United Artists label in 1965. Ms. Carter was known among hipsters at the time as an extraordinary jazz vocalist, but she was largely unknown to the record-buying public. Several albums on ABC and Epic in the late 1950s and early '60s hadn't improved her visibility, and even a duet recording with Ray Charles did little for her career. It wasn't until she started her own label that Betty began to be recognized for the giant that she was.

"Inside Betty Carter" was her last album before going out on her own, and it's a first sign of great things to come.

At a total length of 27 minutes, the record's entire program is shorter than some of the tunes Ms. Carter would sing on stage. But each of these performances is a flawless wonder, filled with nuance, brilliant improvisation and delightful surprises. The backing trio of Harold Mabern – not normally thought of as an accompanist – Bob Cranshaw and Roy McCurdy swing hard and push Betty as much as she pushes them.

The standards here are deconstructed and revitalized as living things – you can suddenly hear the lyrics and the emotion behind them. A Carter original, "Open the Door," one of her signature tunes, is debuted on "Inside," and the singer's reworking of "My Favorite Things" is a 90-second encounter with genius.

Betty Carter never had the instrument that Ella or Sarah had. Her voice was high and her sound was sometimes breathy and thin, but her range and musician's ear led her to develop a style that was stunningly adventurous and purely expressive. That style gets its start with this recording. If you've never heard it before, get thee to Rapidshare!

As always, these files come from the original vinyl, no cleaning of the sound required. A word of warning: these are wav files and are much bigger than our usual mp3s. The download time may be rather long ... 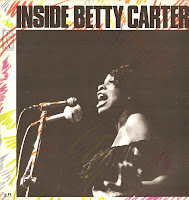 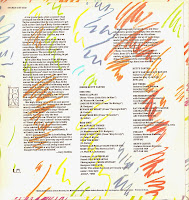 1. This Is Always
2. Look No Further
3. Beware My Heart
4. Something Big
5. My Favorite Things
6. Some Other Time
7. Open the Door (Betty Carter)
8. Spring Can Really Hang You Up the Most