They say that those who have talent play jazz, and those who have no talent write about jazz. (I don't know if they really say that, or if it's even true, but it seems like a nice smart-alecky way to start off this posting.) 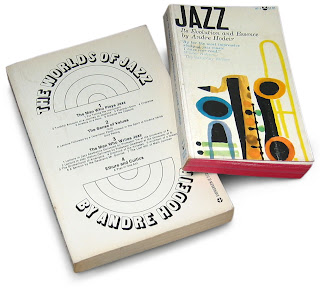 When I was first getting into this music back in the '70s, a jazz pal introduced me to the work of Andre Hodeir. He had written a wonderful book immodestly titled "Jazz: It's Evolution and Essence" and I plowed through its chapters on Bird and the Cool players, thoroughly enjoying (though not always understanding) his analyses. He had a very hip, improvisatory lilt to his prose (courtesy of his translator David Noakes, perhaps) and I thought he read like jazz sounded. Not like Leonard Feather or the guys who wrote for Downbeat. Hodeir swung.

Many years later I was digging through the miscellaneous bin in a great used record store that used to be on Congress St. in downtown Portland, Maine. I came across a mint Savoy recording, one of those '50s records with a heavy boards and a color photo laminated in glossy plastic on the cover. This one featured some all-stars from the Savoy roster playing the music of – whad'ya know? – Andre Hodeir. I had no idea the guy wrote music, and here was a full LP of his compositions. Theory meets praxis.

The record seemed worth the three bucks they were asking, so I bought it and took it home for a listen. Since Hodeir's prose was so hip, I thought it was a cinch the guy's tunes would be tres cool. Wrong.

What we have here are nine very dense, occasionally unmanageable pieces that are consistent largely in the fact that not one of them swings. There are good solos, and some fine moments, but overall Hodeir's music falls flat. If you read his notes on the back cover, you see that he was at pains to meld concept with composition. But he seems to have left out the most salient element of all – the swing. To paraphrase Duke, these numbers don't mean a thing. On that level anyway.

So why offer this LP here? Well, for one reason, you'll never see it on i-Tunes, or anywhere else for that matter. And for another, any record with Hal McKusick and Annie Ross is of interest. But mostly I'm curious to hear what you think of Hodeir's tunes. Don't get me wrong – the music is well played and the compositions are thoughtful (perhaps overly thoughtful). I just think that if you know Hodeir's texts, you might want to check out his tunes.

As always, these files were ripped from the original vinyl with only a very minor cleaning of the sound. 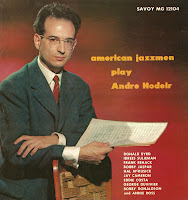 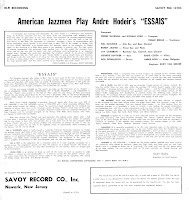