The recordings that I post here on Gems are, as frequent visitors know, ripped from the original vinyl or shellac. I try not to fool with the sound beyond getting rid of the most egregious pops and clicks. That's not to say that the sound is funky on these offerings – quite the opposite. If you've availed yourself of any of them, I think you'll agree they pass muster sonically.

That said, this latest upload is an exception.

"Chicago Jazz," an LP issued from 78 rpm discs that were released by Decca in April 1940, attempts to recreate jazz from the post-King Oliver period when a bunch of high school kids – white kids – adapted Papa Joe's New Orleans-style jazz to their own purposes. Called the Austin High Gang, these roustabouts adored the two-beat ensemble style that was played at the Lincoln Gardens on Chicago's South Side. They were truants with a single purpose – to play music like the King and his protege, Louis Armstrong.

By 1939, the Chicago style of jazz propagated by the Austin High crew was old hat, yesterday's news. But a young producer and jazz fan, George Avakian, felt that contemporary audiences needed to hear it in all its glory. So he organized a series of sessions for the Decca label specifically to recreate its hoary style. His efforts not only resulted in a fine series of jazz recordings, they also sparked a minor revolution in the jazz industry.

Seeing that there was a burgeoning market for classic jazz styles and historic recordings, Columbia, Victor and other record companies began reissue programs. Soon discs that long unavailable – fabulous sides by Armstrong, Oliver, Ellington, Jellyroll Morton and countless others – could again be found in local record stores.

This is the record album (or at least the LP version) that started it all. And as such, it's a natural candidate for a Gems posting.

Trouble is, the LP is in horrible – and I mean horrible – condition. It's something I would never have dreamed of uploading here. Until a bit of serendipity intervened, that is.

I recently acquired a nearly complete set of Jazz Information magazines. This publication was short-lived – around for only two years – but it is credited with being one of the first music publications to concern itself exclusively with jazz (Down Beat was more of a pop music rag at the time). It is usually credited to Ralph J. Gleason, later the influential critic for the San Francisco Chronicle and jazz publications, but it really was the brainchild of one Eugene Williams (Gleason was relegated to an associate editor after half a dozen issues).

In one of the issues of JI was a lengthy review of the sides waxed for the "Chicago Jazz" album. When I saw that, I decided I had to post the LP, scratches be damned! Here's the complete JI review from April 1940: 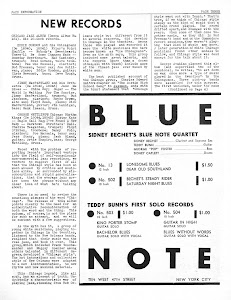 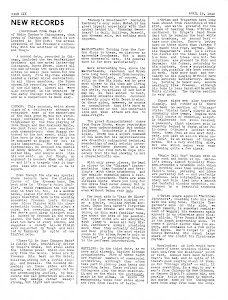 I've done considerable work to clean up the record's pitiful sound and though there are crackles here and there, one can now hear the music clearly. And great playing it is – especially the Bix-like trumpet work of Jimmy McPartland and the unusual alto sound of Boyce Brown, a stylist without antecedent (at least, to these ears). If you're in downloading doubt, here's a sample of the quality you'll get (Jimmy McPartland's "Sugar"): 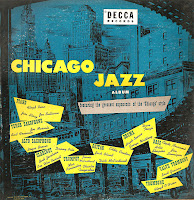 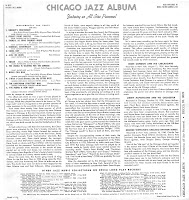